About two weeks ago I received my shiny new N900 mobile computer. This is the latest model in Nokia's internet tablet series, which includes the 770, the N800 and N810. Unlike its predecessors, the N900 now also works as a phone. I had previously owned only the 770, so the switch to the latest model was quite a leap.

The 770 was released almost exactly four years ago, and if you put it side by side with the N900 it becomes obvious that much progress has been made. The N900 is slightly smaller, albeit thicker and heavier, but it easily fits in a pocket. It lacks the screen protector though, so some kind of a carrying case or pouch is a must to avoid scratches. N900 still uses a resistive touch screen, meaning no multi-touch. The screen feels similar to the one in the N97 phone and is clearly optimized for use with a finger, whereas 770 was best used with a stylus.

The software side has seen great improvements as well. The UI in general looks very modern and feels much snappier and more responsive than the 770's. Especially the web browser is much nicer. Being Firefox based, it renders pages just like on a desktop PC. The flash player has been updated and it can now even play Youtube videos. Most importantly, the new browser is fast! Visiting a large page with the 770 would lock up the browser, whereas the N900 is snappy and smooth even on JavaScript heavy pages like Slashdot.

Another cool thing is that the N900 comes with an X terminal built-in and sudo gainroot.sh is all it takes to get root access. This is something most "regular" users probably won't care about, but I for one appreciate it when the manufacturer actually lets me do what I want with the hardware I bought, rather than actively discourage it.

The N900 is by no means perfect though. Syncing the calendar or address book with Ovi is not supported, which is odd considering how much Nokia promotes it. There's even a Ovi Store icon in the application menu, which just brings up a page saying the Ovi store for maemo is not open yet. Ovi maps is strangely limited. It takes ages to load and hogs the whole screen while doing so, meaning I can't switch to some other app while it loads. Basic features like voice navigation and location bookmarking are missing and the maps seem to be a bit out of date.

At first glance, the actual phone functionality seems almost like its hidden. It becomes clearer, however, when you understand that the N900 is not a phone with a built-in computer, but a computer with a built-in phone. With this in mind, the phone features (including Skype, Google talk and SIP) become easy, even intuitive, to use.

Despite the problems, many of which will undoubtably be fixed in future updates, I would say the N900 is an excellent mobile computer/phone. Is it the iPhone killer? No. In terms of ease of use, the iPhone is still miles ahead. But N900 is the phone for engineers and nerds. 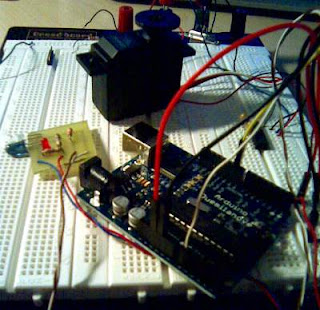 Decided to upload some old, but not entirely useless, old programs I've written. You can find them at the odds and ends page. They are not really usable pieces of software, but might serve as a starting point or inspiration for someone. Currently, I have three programs up: