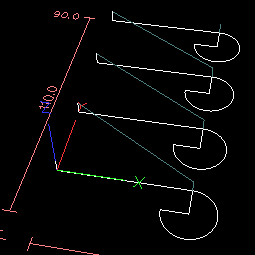 Today I did some tests on my CNCDIY 3040 router/mill to see how different speeds and feed rates affect the cut on various materials.
The materials tested were wood (oak), acrylic and polycarbonate.

I used a simple test pattern (G-code available here) with motions in different directions to help detect backlash and inaccuracies. 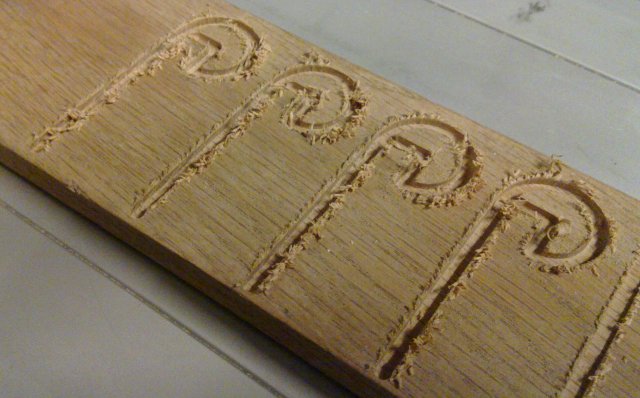 The acrylic tests were made with a 5mm thick piece of plexiglass. The first three cuts were made with the same endmill, a spindle speed of 8000 RPM and the feedrates of 300, 400 and 500 mm/min.
Shortly into the third cut, the endmill snapped. Rather than chipping off cleanly, the acrylic swarf melted onto the tool and clogged it up. Additionally, the test pattern revealed some inaccuracies. The beginning and the end of the tool path were almost a millimeter off. The most likely explanation I have is that the lateral force exerted by the tool caused the work piece to move a little as it wasn't held down very tightly.

For the next test cuts, I switched to a half round straight bit (1/8") which worked much better. (This tool is actually intended for plastics, so no wonder)
The cuts (1mm deep) with the new tool were made with a spindle speed of 9500RPM for the first one and 11000 (maximum speed for the E240 spindle) for the rest.
Feed rates were 200, 300 and 400 mm/min. The last cut was the cleanest. 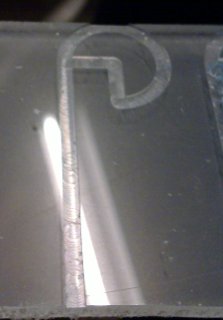 The accuracy problem also went away with the new bit. I can't discern any over or undershoot with the naked eye.

As can be seen from the image on the right, the bottom of the groove has marks from the tool, but the edges are very clean. In comparison, the endmill left a more uniform but milkier finish.

Finally, I did the same test on a piece of polycarbonate plastic. Polycarbonate is not quite as hard as acrylic, but is easier to work. I did three 1mm deep test cuts at 9000RPM with feed rates of 200, 300 and 400 mm/min. All looked fine.

Next, I did one 2.7mm deep cut at 200 mm/min. The quality appeared fine but the tool made a terrible noise, so I decided not to push my luck with faster feed rates.

Email ThisBlogThis!Share to TwitterShare to FacebookShare to Pinterest
Labels: CNC