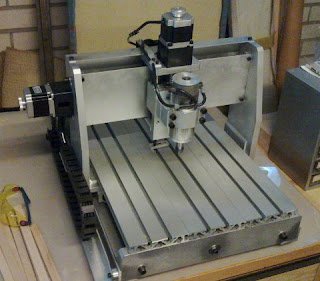 For quite some time now, I had been wishing for a CNC router. On almost every project I did, whether that be woodworking or electronics, there was usually some part that made me think "if I had a CNC router, this would be easy;" but I couldn't justify spending thousands of euros on something (no matter how cool) I'd only be using for hobby work.
Recently, I found a manufacturer, CNCDIY, that makes affordable desktop CNC routers. They have (at the time of this writing) two very cheap models, the 2520 and the 3040, both under $1000. I decided to buy the 3040 as it has a slightly larger working area and has ball screws instead of trapezoids. According to the manufacturer, the 3040 can mill soft materials like wood, plastic and even aluminum. I would guess milling aluminum is very slow work on a machine like this compared to a "real" milling machine, but this machine should be just perfect for my needs. (Wood, acrylic, PCBs, possibly thin aluminum parts)

So far, I've been quite satisfied with my new CNC router. It seems to be solidly built and fairly accurate. (Note that as I'm still new to CNC, this endorsement should be taken with a grain of salt.)
Of course, there are a few negative points as well:
I use my old PC running Ubuntu 8.04 (installed with the EMC live CD) as the controller. I first tried the latest 10.04 version, but couldn't get the latency down to an acceptable level. The worst case latency with 10.04 was something on the order of 2 milliseconds, which is way too much for real-time work. After installing 8.04, the max latency reported by latency-test dropped to about 14 microseconds. Interestingly, the EMC version of 8.04 has ACPI disabled but 10.04 doesn't. Disabling it didn't help the latency score though. It appears 8.04 works better on some computers and 10.04 on others.
Normally I'd like to run the latest OS version, but in this case it doesn't really matter as the computer is not connected to a network and only needs to do two things: Run EMC and copy files off memory sticks.

Edit 11.3.2011: Here is my EMC2 configuration file. The scale is inverted because otherwise the axes would move in wrong directions. If you regenerate the configuration with stepconf, you may need to add the - signs back manually.

Last, some notes on CAD/CAM software. There appears to be a dearth of good (or any) CAD or CAM software for Linux. So far, I've found the following that appear promising:
Finally, there's always your favorite text editor and custom code generators.